COP27 and the win for climate vulnerable nations 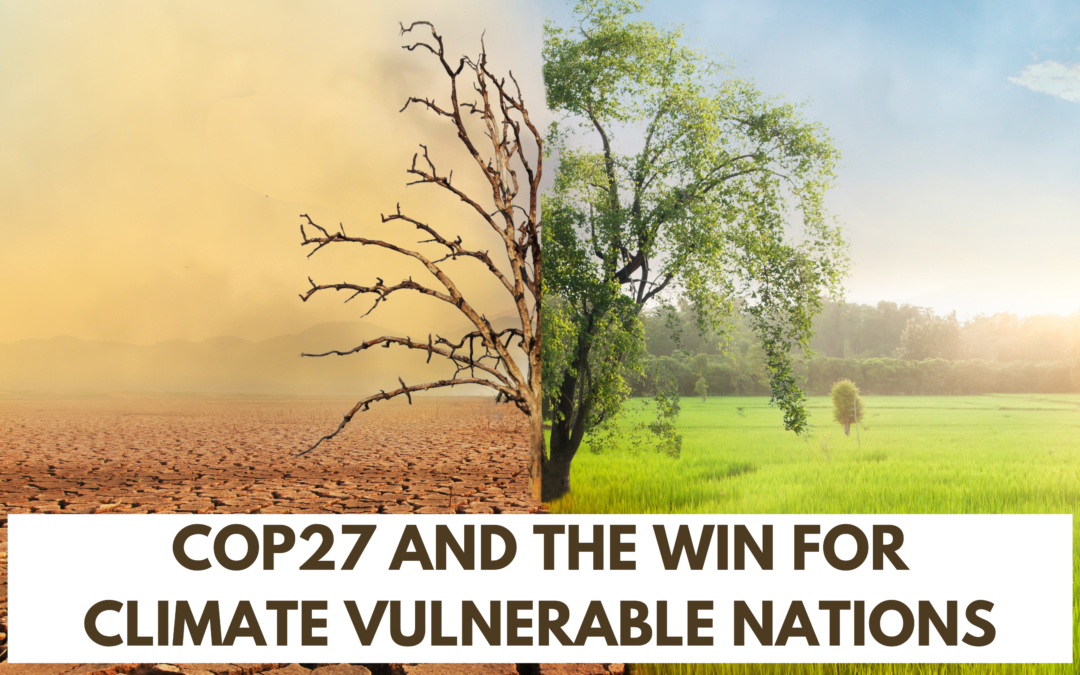 From the devastating impact of Russia’s war on Ukraine to the FIFA World Cup being hosted by a country accused of human rights violations to the atrocities committed against Iranian protestors, those who believe in true social justice have little to celebrate as 2022 draws to a close. This is, of course, apart from the agreement on a loss and damage fund, which was reached in the early hours of the (new) final day of the 27th session of the United Nations Framework Convention on Climate Change (UNFCCC) Conference of Parties (COP27).

Between 6 and 20 November 2022 (originally meant to close on the 18th) members of the UNFCCC gathered in Sharm El-Sheik for what was vastly regarded as the “African COP”. Given its informal billing (as the African COP), representatives from African countries, and those countries that hold a similar perspective on climate action and climate justice, were expected to turn up with a unified voice on these issues. And, to a degree, they did just that.

Among the most crucial wins for lower-income nations was the establishment of the loss and damage fund, which aims to provide financial assistance to those countries that are vulnerable to the negative impacts of climate change, which include, inter alia, rising sea levels, ocean acidification, prolonged heat waves, and desertification.[1] The importance of the loss and damage fund stems from the fact that richer countries are historically responsible for most of the anthropogenic greenhouse gases (GHGs) present in the atmosphere (see Figure 1), while poorer countries, are least responsible for historical GHG emissions,  but are forced to endure the devastation of extreme climate events. In this vein, it is important to note that the establishment of the loss and damage fund was deadlocked for decades due to wealthy nations’ fears of the degree of liability they may face.

Source: Consultants computation using data from Our World in Data.

To put it into perspective, Pakistan, which emits less than 1% of global emissions has seen USD 30 billion worth of damages, more than 1500 lives lost, and a third of the country plunged underwater from severe flooding. Similarly, it is estimated that Africa, which contributes the least to climate change, will see its countries spending five times more on climate adaptation than on healthcare.[1] Thus, the establishment of the loss and damage fund will serve as a beacon of hope in mitigating the financial impacts of catastrophic climate events.

Despite the creation of the fund, however, several decisions have been postponed to next year. Representatives from 24 countries will work to determine, among other aspects, the fund’s form, which countries qualify for the funds, and which countries will contribute to the fund. Within this context, the United States (US) and European Union (EU) are advocating for China to contribute to the fund and not receive from it due to its position among the largest economies and leading emitters in the world.[2] The world waits with bated breath to be informed of the full outcome of the agreement at COP28.

Ultimately, COP27 represented a win for lower-income countries as much was done to assist in adapting to the impacts of climate change. Conversely, the outcomes may represent a loss for those countries advocating for reduced fossil fuels reliance as little was done to further the commitment to curbing emissions. This puts on display the differing perspectives on climate change and climate action that perpetuates between developed countries and those of a less developed status.

Nevertheless, it makes little sense for rich countries to prevent fossil fuels-driven prosperity in poor countries (particularly in those abundant in these resources) while their own riches were obtained via the same means. It makes even less sense when one considers that those at the fore of the phase-out fossil fuels agenda have recently green-lit the development of a new coal mine.[3]

Unless those advocating for reduced fossil fuels use can provide all which is necessary to secure lives and livelihoods, including infrastructure to meet growing energy demands and FDI to secure jobs lost in traditional energy sectors, time should be given to lower-income countries to prosper from the use of fossil fuels – albeit using cleaner technologies – and naturally, transition to renewable energy sources in a manner that is akin to rich countries.