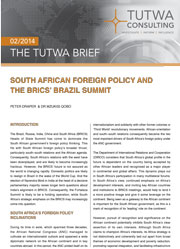 The Brazil, Russia, India, China and South Africa (BRICS)
Heads of State Summit has come to dominate the
South African government’s foreign policy thinking. This
fits with South African foreign policy’s broader thrust,
particularly south–south relations and the African agenda.
Consequently, South Africa’s relations with the west have
been downplayed, and are likely to become increasingly
fractious. However, the BRICS’ future is not assured as
the world is changing rapidly. Domestic politics are likely
to realign in Brazil in the wake of the World Cup. And the
election of Narendra Modi in India at the head of a decisive
parliamentary majority raises longer term questions about
India’s alignment in BRICS. Consequently, the Fortaleza
Summit is likely to be a holding operation, while South
Africa’s strategic emphasis on the BRICS may increasingly
come into question.