KwaZulu-Natal, the gateway to …

A vibrant manufacturing sector can be a great credit to any developing nation, it contributes to the local economy by acting as an employment sponge, it increases income as output increases and serves as a catalyst for innovation which can catapult a state from developing to developed. The key is competitiveness. In his keynote address at Frontier Advisory’s Frontier Forum in Durban, Peter Draper addressed the question ‘Can KZN be the gateway to Southern Africa for manufacturing MNCs?’ With the Dube Tradeport in Durban earmarked as a South African Special Economic Zone or SEZ, the speech was intended to frame the discussion over whether Dube tradeport is well positioned to build dynamic manufacturing industries around MNC investments.

Manufacturing competitiveness in the global economy means being able to compete against manufacturing giants with good access to lower cost inputs, most notably cheap semi-skilled labour and favourable local policy, a key component of which is attractive FDI policy. With increased global connectivity the cheapest products available to the global market are those manufactured via global value chains (GVC’s), which is seen as the new battlefield for aspiring competitive manufacturing industries. This means that countries looking to develop a competitive manufacturing sector need to consider plugging into global value chains and participating in the fragmented production process, rather than aiming to produce goods from start to finish, as in the old days of import substitution. 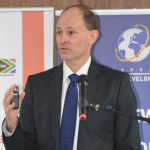 Mr Draper mentioned that countries that have successfully developed manufacturing industries – and as a consequence developed beyond manufacturing – follow the flying geese pattern, a metaphor for multinational corporations (MNC’s) moving to areas with favourable manufacturing environments, the key criteria being: abundance of labour, low wages, relative skills, and availability of capital and technology, be it local or obtained via importing.

A notable difference, among many, between South Africa and the Asian tiger economies is South Africa’s weak comparative advantage in availability of cheap semi-skilled labour compared to African competitors such as Ethiopia and Nigeria. In the absence of cheap semi-skilled labour South Africa and by extension the Dube Tradeport’s possibility to plug into GVC’s via the flying geese pattern is unlikely due to regional competition. The best alternative is to serve as a regional economic gateway.

Regional gateways plug into GVC’s by serving as “transmission belts” for goods, people and ideas. The key comparative advantage needed to serve as a regional gateway is geographical nodality and the means to serve MNC’s logistical needs. In geographical terms South Africa is poorly placed, being located at the Southern tip of Africa, to serve Africa as a continental gateway. However South Africa has competitive advantages when it comes to transportation infrastructure on the African continent.

Other criteria required to serve as a gateway includes compatible economic activities with regional partners and infrastructure links to these partners. South Africa’s compatibility with regional partners’ economic activities is not immediately apparent and even in cases where they are, South Africa lacks the critical nodality factor. Although South Africa currently hosts the most significant ports in Southern Africa, notably the container terminal in Durban and deep water ports in Richards Bay and Saldanha Bay, regional competitors are emerging and quickly eroding South Africa’s competitive advantage in terms of infrastructure links.

In a lively panel discussion on the opportunities KwaZulu-Natal manufacturers can pursue through the Dube Tradeport SEZ, several themes arose. South Africa’s manufacturing sector, as a percentage of GDP, has been decreasing over the past 20 years, although KZN has the biggest manufacturing sector of South Africa’s nine provinces. Domestic policy is in place to increase industrialization but implementation takes considerable time and the resulting lag defuses any momentum, and even though initiatives are in place there seems to be no coherent strategy to encourage investment into the country. Furthermore, policies geared to absorb unskilled labourers tend to be short-term fixes and don’t benefit the economy in the long run as businesses cannot sustain unskilled labour with high wage demands. For the economy to benefit, value-addition needs to take place via better implementation of plans that include MNCs that can plug into GVCs and encourage technology sharing.

South Africa faces budding challenges with the gateway strategy some of which are self-inflicted, others unavoidable. For example South Africa, owing to its geographical constraints, faces strong competition from offshore competitors and lacks large regional markets required to fully enjoy the advantages of a gateway strategy. South Africa’s domestic policy towards FDI is also perceived as unfavourable and it loses out in terms of regional comparative advantage in crucial MNC attracting criteria.

The Dube Tradeport positions itself as a more favourable MNC destination in that it addresses investment attractiveness, but it is inescapably part of South Africa and the Southern African reality. It is a great initiative that needs to be supported on a country level in that it has to deepen its role as a South African and regional trade node. But in order to succeed the province has to exert its political influence via the governing tripartite alliance at national level, in order to change national trade and investment policies towards a more FDI friendly orientation. In doing so it also has to change the growing international perception that South Africa is an increasingly risky investment destination.

Feature on panel discussion and photo provided by Frontier Advisory