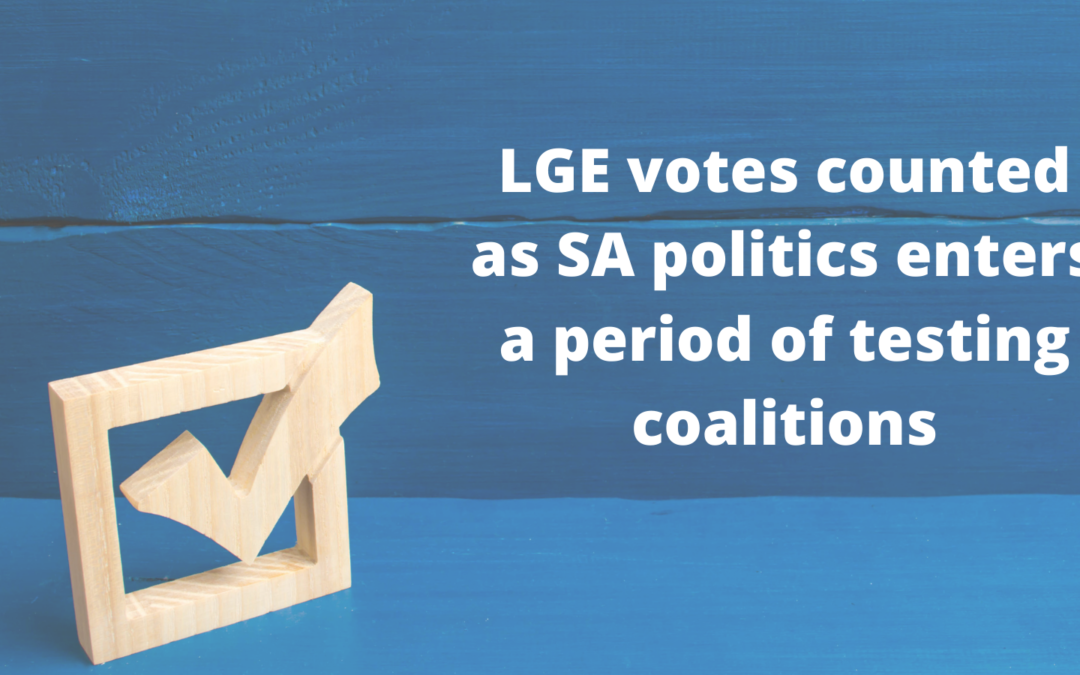 As the IEC announced the final election results, South Africans reflected on the outcomes: whether their candidate or party of choice saw the results they were hoping for, whether their protest vote made a difference to the municipal makeup or, for the majority, what the election results looked like without their vote. Most were however, celebrating the fact that they had gone without power cuts for at least three days.

After the dust settled, it emerged that the majority governing party, the African National Congress (ANC), lost some ground while maintaining their hold on 161 municipalities. The Democratic Alliance (DA) achieved a majority in 13 municipalities, while the Inkatha Freedom Party (IFP) won 10 municipalities. The largest change, however, was in the number of hung councils, i.e. those in which no party achieved an outright majority and would require parties to form a coalition or minority government. A total 66 Municipalities were reported as hung councils by the IEC, more than twice the number compared to the previous election’s 27.

Council members have 14 days after the announcement of the electoral results to meet and appoint (elect) its representatives, including the council speaker. While this does not pose a problem for councils with an outright majority, negotiating coalitions or minority governments can be very challenging. This involves agreeing on a broad policy agenda, which for many parties means compromise on their own electoral platform and ideals and agreeing on the composition of the executive mayoral committee, which have extensive executive power to run the municipality. However, a municipal council by resolution may remove its speaker (and mayor) from office with the support of a simple majority of council members, which makes these types of governments less stable.

Experience from previous hung councils are discouraging. Some worked for a while thanks to minimal commitments made by the parties involved, some worked initially as parties extended olive branches (mayoralty) as a show of good faith which was eventually abused, while others failed to work from the onset due to grandstanding and seemingly irreconcilable differences. This often left municipalities without the critical executive mayor or mayoral committee, which meant that many operations ground to a halt, and in most cases also saw career civil servants lose their jobs, amounting to a loss of institutional memory and experience in municipal operations.

Some hung councils will likely survive the first bout of appointments and horse-trading, some may even become shining examples for other councils to look up to, but many with persistent challenges are likely to fail and drag their constituents down with them. This is not outright pessimism over elected council members, or the parties involved, but rather the immense pressure of having to get a lot done with dwindling resources while building the proverbial house of cards.

Municipalities are mostly funded by subsidies from national government, charging property rates and selling services, like water and electricity, to their constituents. However, these main income streams are under pressure from a number of factors which are particularly prevalent in small town South Africa.

Horse trading might be the order of the day for many councils, but as the euphoria of playing politics fades and the reality of running a municipality sets in, the seemingly insignificant flaws of an uneasy coalition will push many to the brink and may make things worse for everyone. Of course, municipal mismanagement and financial stress is also present in outright majority run municipalities, but as conversations about the fairness in the division of revenue continue, the quality of governance at municipal levels could prove harder to address in coalition governments. Time will tell if we can learn something about governance from coalitions, or if perhaps the pressure will shift the political centre of the governing parties towards a new political moderate.