Namibia “The Land of the Brave” 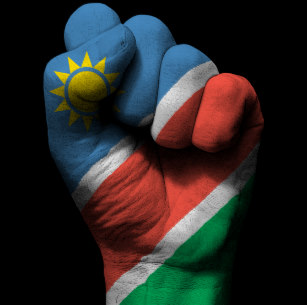 The “bravery” referred to, is associated with the liberation struggle, the resistance against foreign occupation and apartheid. When Namibia was under foreign rule, young women and men went into exile to fight at the frontline in order to liberate the country and it was this “bravery” which meant they were uncertain whether they would ever return to their homes. It was thus that the concept of the land of the brave was adopted. Today, we also have brave leaders even amongst the youth who stand up against injustice against government, unfairness or any form of oppression.

This attribute of bravery was seen from the earliest days of Namibia’s fight for its freedom against colonial oppression. This was also the case within the South West African People’s Organisation (SWAPO) to ensure equality for all Namibians. This was even addressed within the movement itself, where any member was brought in line to ensure fair treatment for all.

Namibia had battled for many decades to free itself from dominating oppressors. From 1884, Namibia was a German colony, German South West Africa. After the First World War, the League of Nations left SWA as a South African-administered territory. After World War Two, the United Nations took over from the League of Nations and instituted a trusteeship system where all former German territories were brought under UN control. South Africa objected on the grounds that SWA people were content with South African control. Of course, this was not the case given the sustained aggression from South Africa’s Defence Force – particularly their specialized units of Koevoet and 32 Battalion – against SWAPO and its People’s Liberation Army of Namibia. It took years of planning, protests, and battles against colonial powers, until together with pressure from the international community the country finally gained its independence from South Africa on 21 March 1990.

Namibia has a rich cultural background with tribes like the Oshiwambo, Kavango, the Herero, and the Damaras to name a few. With a population of 2.6 million people in an area of 825,615 km2, Namibia’s land mass is expansive, relative to South Africa’s population of about 57 million across a land mass of 1,219,912 km². The large, arid Namib Desert has resulted in Namibia as one of the most sparsely populated countries in the world.

Agriculture, tourism, and mining – diamonds, uranium, gold, and silver – form the basis of its economy. It is bordered by South Africa in the south and east, Botswana in the east, Angola and Zambia in the north, and the Atlantic Ocean to the west. This is a brief picture of my land of the brave.