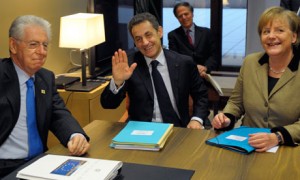 None of the many EU summits so far were able to tackle the main problem of the European public debt crisis. The core problems of the eurozone (EZ) then were, and still are, a) the level of public debt in almost all member countries, b) disincentives through bail-outs by other governments and monetization of public debt by the ECB, c) the even greater risks through the TARGET2-system, and finally d) repressed structural reforms in the EZ.

In October, I predicted a gloomy future for the EZ if governments did not tackle the core problem. The good news is that some countries started the necessary reform process before the meeting, and that the Brussels Summit from January 30th tackled the fiscal problem by agreeing on a fiscal pact, which has been approved by 25 out of 27 EU governments. The bad news is that the loopholes in the fiscal pact are still enormous, and that we again have to trust in an only poorly enforceable European agreement. Since the Summit failed once again to address the bail-out problem, the disincentives for governments to externalize domestic problems by holding other nations’ tax payers hostage are still real. This in turn may lead to less fiscal discipline than the whole continent badly needs. Even more important, the necessary structural reforms to ensure fiscal discipline and competitiveness might also be prevented by bail-outs, which cannot be instrumentalized to ensure reforms and fiscal solidity when the fiscal pact is not enforced.

How relevant this danger is can be seen in the pressure put forward on the EZ’s governments to increase the ESM. Both the Italian Prime Minister Mario Monti and the IMF head Christine Lagarde urged Chancellor Merkel to give in to these demands. However, the dramatic statements by the head of the IMF are misplaced: just a week before Mrs. Lagarde warned the world of a repetition of the 1930s, the funding conditions for Spain and Italy had much improved; there was no need to panic. It is irresponsible and irritating that leading global politicians cannot keep quiet in such precarious situation.

What the Euro requires is a longer period of calm and determined policymakers who are doing their jobs properly. These jobs include addressing the causes for the fiscal problems (unemployment, subsidies, too high military spending, indulgence towards interest groups) and making their economies more competitive. The job description prohibits a hyper-nervous response to every market movement − Ireland being a case in point. Without much ado, the new government started the reform program, which will hopefully bear fruits in due course. Why not sign a silence pact in the EZ next?