South Africa and the ‘currency wars’ 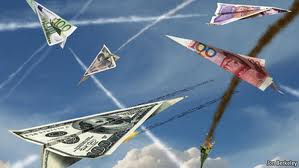 This is a moot debate since the scale of capital inflows relative to currency reserves, plus a history of failed interventions in the past particularly during the East Asian financial crisis, mean the willingness and tools to engage in such intervention are not available domestically.

Meanwhile the international currency debate rages on, along two axes: the US accuses China of deliberately undervaluing its currency in order to gain advantage for its export industries, while Brazil and its apparent allies in the BRICS, including South Africa, complain that the US and other advanced countries are deliberately undervaluing their currencies by pursuing quantitative easing.

So what is South Africa’s interest in this debate?

The Chinese currency is undoubtedly deliberately undervalued. China’s capital account remains closed, notwithstanding recent experimentation with Renminbi internationalization via Hong Kong and some neighbouring countries. The latter has been partly responsible for the recent substantial reduction of China’s current account surplus, from over 10 percent of GDP at its peak in 2007 to less than 3 percent now. But the slowdown in China’s main Western export markets also takes some of the ‘credit’ and suggests a reversal once those markets revive. But until such time as China’s domestic financial system is opened up and the Rmb floated, currency ‘manipulation’ will remain the order of the day in China. Both are likely to take quite a long time: the financial sector remains repressed, since it is a key pillar in China’s directed finance, export-driven development model; which in turn renders the political economy of reforming the system challenging indeed.

Quantitative easing, on the other hand, is primarily a response to unique economic circumstances albeit the specific methods used differ in each context. In the US, UK, and  Europe it has played a key role in stabilising financial systems, an essential prerequisite for the banking reforms now required. This has stabilized the world economy and therefore has been beneficial.

However, since growth in the developed world remains stagnant, in contrast to relatively rapid growth in developing countries, the low interest rate environment has driven a wall of capital into certain emerging countries with liquid financial markets such as Brazil and South Africa. This has led to currency appreciation in some cases, thus undermining manufacturing exports. So it is not surprising that the US is the main target of Brazil’s ire and the primary motivation behind Brazil’s promotion of the recent seminar on currencies and trade policy held at the WTO in Geneva.

Which of these two situations is of more concern to South Africa?

Quantitative easing is a relatively short-term phenomenon implemented for complex but justifiable reasons. The primary purpose is to underpin economic growth and promote financial stability at an extremely uncertain time in the global economy. If it were removed the consequences for global growth could be very severe indeed. Since South Africa’s growth and exports still depend substantially on the industrialized world this would definitely not be in our favour.

The Chinese currency peg is substantially more damaging to South Africa. We first need to distinguish the South African situation from the US-China dynamic. US concerns about their bilateral trade deficit with China are blown out of proportion, for two reasons. First, the politics of the US-China relationship, or growing ‘strategic distrust‘. China is increasingly seen, and sees itself, as a competitor to the US for geopolitical primacy. The two powers seem to be on a collision course unless corrective action is urgently taken. So it is no surprise that the currency issue is highly politicised.

Secondly, the bilateral trade deficit is statistically incorrect, and potentially by a large margin. That is because it is driven by multinational corporation production networks in which the dominant share of value is retained in the US, for example Apple’s intellectual property rights, whereas final assembly takes place in China from components produced throughout East Asia. Final products are exported to the US and show up as Chinese exports – an erroneous view of the actual ‘processing trade’ underlying the figures.

The South Africa-China trade dynamic is different, again for two reasons. First, political relations are close; some would argue too close and potentially compromising South Africa’s nascent democracy. Similarly, the African National Congress’ flirtation with ‘state capitalism’ is modeled to a significant extent on their interpretation of the Chinese approach.

Second, trade ties are driven by South African resource exports to China, especially iron ore, and imports of manufactured goods. This is a classic comparative advantage story. Nonetheless it should be of concern to those advocating minerals beneficiation in South Africa but who remain remarkably silent on the issue. Furthermore, Chinese manufactured exports to SA contain no SA intellectual property and are not driven by global value chains. Finally, SA manufactured exports compete with Chinese manufactures in third markets, to some extent. Therefore the Chinese currency peg matters a great deal more, and undoubtedly provides an enduring competitive advantage.

The interesting question is why those participating in currency debates in South Africa make no mention of these bilateral issues? Given the broader political relationship this is understandable, to an extent, even if it undermines government’s stated policy of promoting manufacturing and growing manufactured exports.

But what explains the silence of the South African business community, notably the manufacturing circle which is driving the push for devaluing the Rand? In his presentation at the WTO seminar Stuart Jennings, CEO of PG Glass, obliquely mentions ‘certain countries practicing currency linking strategies’ as a major cause of South African ‘deindustrialization’ in addition to those practicing quantitative easing.

Why this coy reference? Could it be because the manufacturing circle, which favours import protection, does not want to lose its sympathetic ear in the Department of Trade and Industry?

If that is the case, then the next obvious question is whether the emerging consensus to pursue import protection is the right policy to promote the South African manufacturing sector, and economic development in South Africa more broadly. That is a subject for another blog.