The heritage of corruption in leadership 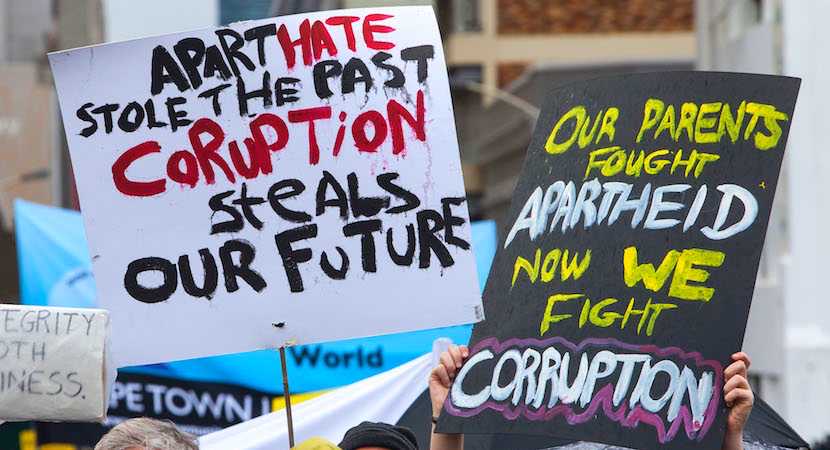 Corruption is perhaps one of South Africa’s oldest traditions. Yet, there seems to be a constant state of shock every time new instances of corruption are revealed. As a discussion point, fraud, corruption, bribery and general dishonesty remain key features of South Africa’s governance landscape and political discourse. Recent revelations that some Politically Exposed Persons (PEPs) further enriched themselves at the expense of efforts to contain the Covid-19 pandemic (and ultimately preserve lives) shows a flaw in the moral fibre of South African society. However, this flaw in our social and moral fabric is neither new nor easy to fix – and, unfortunately, has become a hallmark of our leadership ‘heritage’.

In celebration of Heritage Day this past weekend, we ought to recognise that not all of our culture and traditions are to be celebrated. While corruption is easily and (rightfully) associated with elements of what the African National Congress (ANC) has become since coming into power 26 years ago, we ought to acknowledge the deep-seated roots of corruption anchored in our colonial and apartheid past.

Corruption During Colonialism and Apartheid

Corruption in South Africa dates back to the colonial era. Amongst our early settlers, Jan van Riebeeck, first realised the potential and suitability of the Cape of Good Hope to supply passing ships with fresh produce on his voyage back from northern Vietnam (now Tonkin). He was recalled for using his office as head of the Tongking Dutch East India Company trading station in 1645, but afforded a chance to redeem himself and was tasked with taking command of the initial Dutch settlement in Cape Town. Van Riebeeck and his ilk did through the exploitation of slaves, an inherently morally unacceptable practice – but this period was marked by tax evasion and corruption by public officials.[1]

The British rule which followed was no different, as public spending was directed to serve private interests. The most prominent colonialist of the time, Cecil John Rhodes, was forced to resign after he gave a friend an 18-year monopoly catering contract for the government-run railways.[2] Paul Kruger’s Transvaal Republic, the Afrikaner-governed state against which the British fought at the turn of the century, was riddled with nepotism and economic favours for the connected. Patrimonialism, today colloquially referred to as “state capture”, was common during both the Afrikaner and British rule.[3]

It is therefore not surprising that corruption became an intrinsic element of apartheid South Africa. Many politicians and government officials used government machinery and authority to advance self-interest.  It was black Africans who felt the wrath of the corruption and immorality of both the colonial era and apartheid the most. Political figures exploited state machinery to pursue personal interests at the expense, exclusion and oppression of Africans.

At the advent of democracy in 1994, corruption had become firmly embedded in government machinery and processes. It was also synonymous with business and government relations. These elements set the tone for a post-1994 South Africa.

While apartheid left a legacy of corruption among others, it cannot be faulted for the current corruption. South Africa is at a “tipping point” as corruption is severely entrenched and uprooting it will become a monumental task.

Zwelinzima Vavi’s remarks alluding to the fact that South Africa was in danger of becoming a “predator state” where a new tier of leaders believed it was their turn to “feed”[4] summed up the challenge we currently face.  Once corruption becomes normalised and instutionalised within our society as it is currently, it can be almost impossible to uproot. The entrenched nature of corruption requires bold and decisive action to eliminate.

Despite the reality of corruption, as indicated by South Africa’s ranking as the most corrupt country in Africa by respondents in the Global Corruption Barometer on Africa conducted by Transparency International in partnership with Afrobarometer,[5] there are still instances of defensiveness and denialism, particularly in political circles.  This further shows the tough task the 6th Administration is faced with in curbing the ills of corruption.

While the first steps of rebuilding and capacitating law enforcement agencies have been taken by the 6th Administration, political will is also required. The second phase of addressing malfeasance within the state should focus on professionalising the public service. While Ramaphosa has made his intention to this effect clear, this needs to be operationalised. Furthermore, a clear buffer between state and party needs to be devised. The blurred lines between the party and the state has had an increasingly adverse impact on the functioning of the state bureaucracy and public institutions, since this approach has no regard for merit or sound governance. Superimposing party on state is ultimately geared towards capturing the state for narrow self-interest.

As such, curtailing patronage, the ‘jobs for pals’ and cronyism should be at the crux of efforts aimed at combating corruption. Cadre deployment creates a conducive environment for corruption to thrive in the public service and also facilitates it. This is so because cadre deployment allows party factional dynamics to play out within state institutions and in so doing, weakening them. Secondly, corruption usually plays itself out in public procurement processes through deployees interfering with procurement processes by facilitating state contracts for their preferred bidders and also inflating payments for service providers for kickbacks.

Strong state institutions, particularly law enforcement agencies, and a professionalised public service are the anchor of the efforts geared towards combating corruption. However, the realization of this rest on the political will from the political leadership. While corruption is an inherited legacy, it cannot be allowed to persist as it diminishes the capacity of the state and short-changes society. Corruption is immoral and has no place in our society.

[1] Steven Friedman, Prof. of Political Studies at the University of Johannesburg. ‘Corruption is deeply rooted in South Africa’s past. This is why it matters’. IOL (30 August 2020).