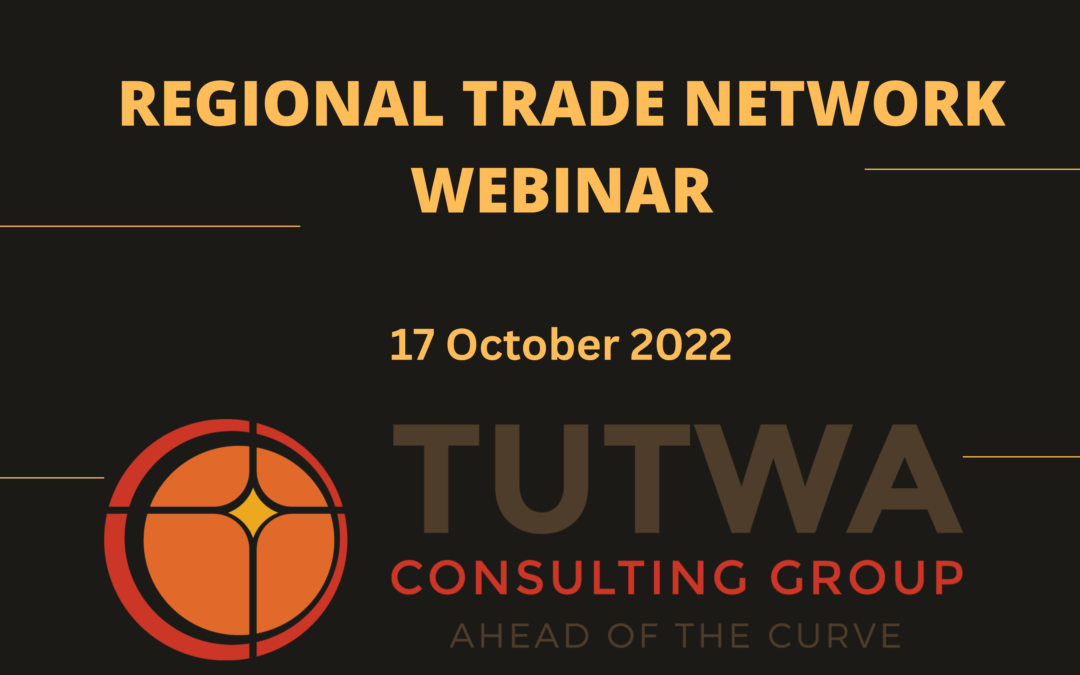 On 17 October 2022, Tutwa Consulting Group launched the TradeNetwork with its inaugural webinar under the theme: “Current and Future Prospects of the AfCFTA”. Trade Network is an initiative by Tutwa Consulting Group whose starting point is to work in Sub-Saharan Africa, leaning into the network of academics, practitioners, and consultants across the fields of law, economics, and trade. The purpose of the initiative is to ensure cooperative research and advice in the complex area of international trade, investment, intellectual property, and dispute resolution for trade and investment matters.

The webinar was the first in a series to discuss the practical and legal implications of the AfCFTA for intra-Africa trade. Some of Africa’s great policy thinkers, drawn from international organizations, think tanks, and academia, were invited to participate in the discussion. The speakers discussed the status of the AfCFTA, new generation issues that predominantly define Industry 4.0, such as Investment, Intellectual Property (IP), Competition, and E-commerce that make up protocols of Phase II of the AfCFTA. The webinar also dived into a deeper unpacking of the issues and challenges that face the AfCFTA negotiators as the preparations for the AfCFTA Phase II negotiations are underway. The dialogue was cross-disciplinary including lawyers and economists, practitioners, and academics.

This webinar presented an opportunity for participants to engage in a dialogue to understand the significance of AfCFTA Phase II associated regulations and policies that can enable the Member States to fully access and utilize their benefits to promote intra-African trade.

COVID-19 highlighted the friction between commitment obligations under investment treaties and health priorities. In addition to this, the Ukraine war is another example that the global crisis slows down the capacity to react, particularly within the current investment legal environment. The speaker, therefore, noted the need to balance the global investment regulation system and allow countries to balance commitments to investment agreements with reaction to the crisis. This is what one would also expect to be part of the conversations at an AfCFTA level as the Investment Protocol is anticipated.

Despite the above-highlighted challenges, this presentation ended with an outline of some of the opportunities from the Investment Protocol. The anticipated protocol is going to consolidate a vast network of investment treaties and replace bilateral investment treaties between African countries. Further, it is anticipated that the protocol will simplify and consolidate the investment framework in Africa for the benefit of both the public and private sectors. Overall, the protocol is anticipated to give legal clarity to the State and investors and create a modern framework stipulating both commitments from Member States and obligations by the investors.

On a rather more practical and technical note, the second presentation was delivered by Dr. Martin Cameron under the title “The AfCFTA – from words to action: real-world logistics matters”. While the AfCFTA is necessary, Dr. Cameron’s presentation showed that it was not a sufficient condition for economic growth in the region. The focus should include enabling infrastructure and considering private sector rights and interests. On its own, the AfCFTA will not provide any impetus to the private sector.

The presentation also showed that the success of the AfCFTA is dependent on Phase II. Overall, this will include the implementation of an effective dispute settlement mechanism. This is particularly important for the protocol on investment. Generally, international trade needs predictability and ease of access. To achieve this, the Protocols should be negotiated with a view to ensuring effective trade facilitation measures are also incorporated. The AfCFTA Agreement has already made provision for the establishment of an online Non-Tariff Barriers reporting mechanism founded on the SADC-EAC-COMESA tripartite mechanism.

The AfCFTA trade in goods will have a limited impact, especially within and between regional economic communities (RECs). The presenter argued that tariffs are not the major issue that hinders trade in Africa. Logistics and infrastructure have much impact as that tariffs, but the impact is hidden to an extent. Countries can achieve the biggest economic value by cutting drastically the time spent within the proximity of ports of entry and exit. In a nutshell, Dr. Cameron’s presentation brought out an argument that what is key to the success of the AfCFTA is to never let physical infrastructure and logistics be a bottleneck.

The last presentation was delivered by Professor Patricia Lenaghan under the title “The AfCFTA: Variable geometry and gradualism, as a suitable response to the challenges of integration?” Her presentation gave a general and more theoretical overview of the AfCFTA from a South African perspective. In understanding the AfCFTA, it is important to understand the exact nature of the agreement which according to this presentation is a member-driven agreement. One would also at this point ask what the legal status is and what the implications are for the agreement’s implementation.

Lastly, the relationship between RECs and the AfCFTA is also significant. An assessment of the RECs will show that they have been playing a significant role in integrating Africa. This is a good starting point for the AfCFTA as it seeks to integrate the region further economically. However, the same challenge of infrastructure deficiency remains a challenge even for the AfCFTA. There is, therefore, as was noted earlier on, a need to ensure that as the protocol on investment is concluded, it should also provide for investment in infrastructure as well.