What did the investment conference deliver? 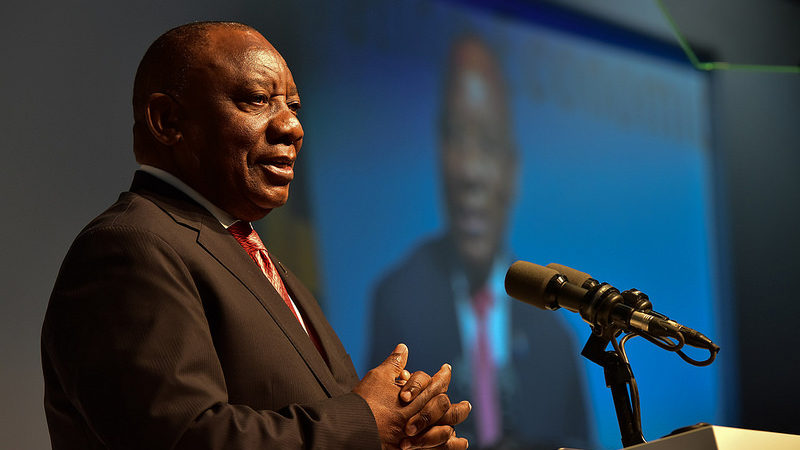 There is much to be excited about in Cyril Ramaphosa’s pragmatic push for new investments in South Africa while also being determined to tackle socio-economic challenges that require redistributive policy approaches.

More than 1,000 delegates attended the investment conference held in Sandton last week. The conference was initially announced during President Cyril Ramaphosa’s maiden State of the Nation Address in February 2018, where he identified measures to be undertaken to boost the economy. These included the Jobs Summit, which took place in September, the establishment of the Digital Industrial Revolution Commission, and the establishment of the Youth Employment Services, among others. The economy was to be the centerpiece of his presidency, with partnership and collaboration between government and the private sector as the driving force of economic change.

During the investment conference, Ramaphosa reinforced the theme of partnership to achieve a social compact that will help address South Africa’s economic challenges.

The conference was marked by a positive mood and enthusiasm. It felt that South Africa was reconnecting once again with its potential. References to the 2010 World Cup by Ramaphosa in relation to the Infrastructure Fund that is in the offing sought to relive a nostalgic era when South Africa was a highly promising country.

There were various moments of gooseumps as investment pledges were announced in multiples of billions of rand. Animated discussions were on the roll at various sectoral breakaways about South Africa’s potential. Government ministers and business leaders were transformed into evangelists of hope. Mining was sold as a sunrise sector, especially now that the Mining Charter has been signed and the controversial amendments to the Minerals and Petroleum Resources Development Act (MPRDA) are withdrawn. The sins of the past were forgotten and forgiven. Various opportunities in agro-processing, infrastructure, and venture capital were promoted.

There is indeed much to be excited about Ramaphosa’s pragmatic push for new investments in South Africa while also being determined to tackle socio-economic challenges that require redistributive policy approaches. The road ahead, however, is long and arduous; and success hinges on concrete actions, beyond the boardrooms and conferences, that government takes to create a sense of certainty about the direction of change. Real change is what South Africans are hoping for, which explains much of the impatience and cynicism, especially with the proliferation of commissions of inquiry and summits.

Ramaphosa is walking a tightrope in making a strong pitch for investment and also pushing for the need to take socio-economic inequalities head-on, especially around the vexed land issue, which he underlined during his opening address at the conference.

Commendably, unlike the first two presidents (Nelson Mandela and Thabo Mbeki), Ramaphosa has avoided for now having different messages to different constituencies – international and domestic – and keeps it consistent. He has been consistent about the need to overcome patterns of asset inequality and to redistribute land for the benefit of historically marginalised black South Africans.

Previous leaders, especially in the early years of South Africa’s democracy, feared threats of disinvestment if the country was seen to be veering towards redistributive policies. Abroad, they would amplify neoliberal positions, and at home they would talk a more Leftist language, and the results at times would yield policy confusion. It is important to stress that redistributive policies are an integral part of economic reforms; and one of the tasks of the leaders is to be imaginative about how to balance competing interests and priorities, and how they deploy resources at the disposal of the state to deliver economic and social value. There is a sense that Ramaphosa grasps the long-term costs of not addressing socio-economic inequalities today, and postponing the sensitive issue of land reform.

At the conference, Ramaphosa called upon the private sector and the investor community to be part of the solution. The earlier policies that emphasised trickle-down economics, according to which the markets will produce desired economic outcomes, left the socio-economic legacy of apartheid and its spatial arrangements intact. They also did not achieve the desired levels of capital formation, and broad spread of economic gains to black South Africans. The structural inequalities, poverty, and joblessness among black youth remained unaddressed. Ramaphosa cannot lean on the same policy approaches that were sub-optimal and leave socio-economic challenges and patterns of exclusion in asset ownership to be solved by future generations.

At the investment conference, Ramaphosa called the South African private sector to lead the charge in investing in the country. Indeed, many South African companies pledged a new injection of capital into the South African economy. Some cynics have argued that these pledges, which were to the tune of R130-billion, were already in the pipeline. Even so, the fact that they were in the pipeline demonstrates a rising confidence and appetite to invest in South Africa. Companies that pledged include the mining giant Anglo American and the rising star Bushveld Minerals; the tech start-up Rain; auto companies Nissan, Volkswagen, and Mercedes Benz; and telecoms company Vodacom.

Government will need to work a lot more with the South African business community to build bridges and overcome the trust deficit. Importantly, such a partnership should produce a sound and credible road map that will fix the economy and tackle the country’s growing socio-economic strain and levels of inequality.

The investment conference should not be seen as a once-off event, a magic wand that will open the floodgates of investment, but as the first step in a series of bold moves that government needs to take to drive long-term social and economic change in the economy.

Government needs to keep the momentum by demonstrating more decisiveness in reforming the economy, in eliminating wastage in government, in cutting red tape, and in rebuilding institutions that are damaged.