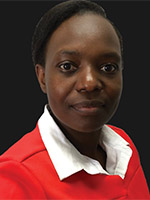 Crescencia is an SMME Specialist and Economist. She has conducted independent research for consultants, government institutions and other regional organisations on SMME development, Local Economic Development, Economic policy, Rural development and Agricultural strategies. Crescencia has extensive experience in building capacity for digital transformation for SMMEs in the tourism ecosystem and developing linkages to Enterprise Development and Access to funding for SMMEs.

Her other areas of research interest include International Trade and Investment and public policy. Crescencia holds a Bachelor of Science Honours in Economics from Bindura University of Science Education, Zimbabwe and a Master of Commerce in Economics from North-West University. She is currently completing her Master of Business Administration from UoPeople, California, US.