ZIMBABWE: UNDERSTANDING THE FUEL CRISIS AND ITS IMPLICATIONS FOR INTRA-REGIONAL TRADE 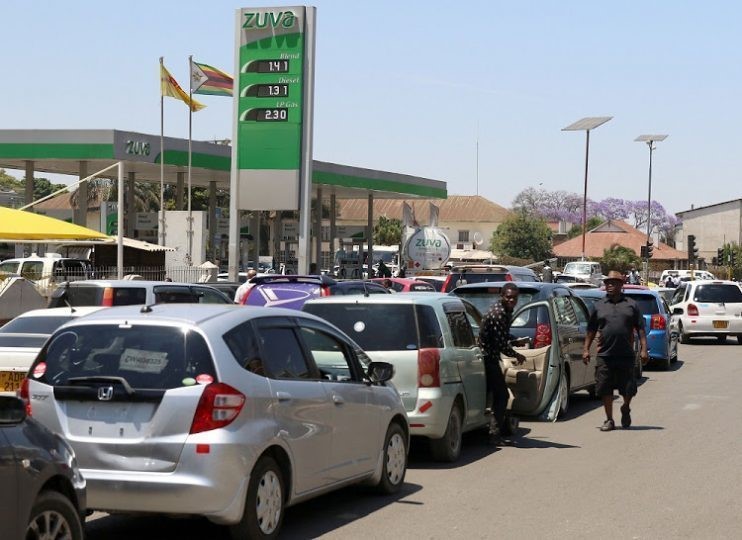 Zimbabwe is currently facing a mirage of both economic and political challenges. According to economist Tony Hawkins, the country is sliding into stagflation where there is slow economic growth and relatively high unemployment accompanied by rising prices or inflation.[i] Other economic challenges include fuel and forex shortages. These have spurred a strong reaction from Zimbabweans who took to the streets to protest a steep increase in the price of fuel that was aimed at stabilizing supply.

Why the fuel shortages?

One of the causes of fuel challenges was a shortage of foreign currency to import adequate supplies of fuel. Between 2009 and 2016, fuel in Zimbabwe was being sold in hard currency. Fuel dealers could import fuel without any challenges during this period.

In 2016, the country started to experience liquidity issues (with limited cash available in the economy) and in response the government introduced ‘bond notes’, which had all the characteristics of local currency but pegged at an exchange rate of 1:1 with the US dollar. People started to purchase fuel using the bond notes and fuel dealers had to approach the Reserve Bank for foreign currency in order to pay for the imported stock. There has been little transparency or certainty in the process used by the Reserve Bank to allocate the cash available to those who apply. Fuel dealers were at the mercy of this system like many others in the country.

The main sources of forex for Zimbabwe have traditionally been from the mining and agriculture sectors. Exports and investment can largely be traced to these two main areas of economic activity but the output is limited, especially in relation to the consumption of the public sector. For example, the trend has been that the availability of cash in Zimbabwe becomes severe after the tobacco selling season. This is a period that is being dreaded as it will quickly approach in the middle of 2019.

Another reason given for the shortage of fuel was that the price of in Zimbabwe was the lowest in the region. At face value, the statistics did not support this argument as is shown in the table below.

On the face of it, Zimbabwe fuel appeared the most expensive in the region. However, a motorist could buy fuel using bond notes. The official rate was 1:1 but the black market rate was around 1:3. It meant that one could take a single US dollar to the black market and get $3 worth of bond notes. In other words, US$1 could not buy a litre of fuel while the same dollar, when changed at the black market, would buy 2 litres of fuel. This distortion encouraged truckers and travelers in transit through Zimbabwe to refuel after changing forex on the black market thereby increasing demand for fuel in Zimbabwe.

In addition to the above, the other reason given for fuel shortages was that there was an increase of motor vehicle imports, especially second-hand ones from countries such as Japan. The Zimbabwe Revenue Authority (Zimra) reported a 41{fdf3cafe0d26d25ff546352608293cec7d1360ce65c0adf923ba6cf47b1798e1} increase in pre-owned vehicle imports at Beitbridge Border Post during the period of January to August 2018. Zimra processed 45 368 import documents for vehicles coming in through South Africa against a total of 26 781 handled in 2017 during the same period.[iii]

The Government of Zimbabwe, through the Reserve Bank, resorted to forex allocation according to a designed priority list. This could not improve the situation as the demand for forex kept increasing while its supply continued to shrink.

The government also came up with legislation to make an exchange of foreign currency in the street illegal with penalties of up to 10 years in jail. Money changers disappeared briefly but are now back on the streets. Their market is still there as banks have no forex to trade.

Another intervention was the introduction of payment of duty in forex for imported passenger motor vehicles and double cabs. This was aimed at reducing the level of imports of pre-owned vehicles as well as increasing the availability of forex in the market. This move appeared effective as the level of motor vehicle imports dropped by 80{fdf3cafe0d26d25ff546352608293cec7d1360ce65c0adf923ba6cf47b1798e1}. [iv]

The other government intervention was the upwards review of the fuel price, announced by the President in January 2019. This was done by increasing the rate of excise duty per litre of fuel. The petrol pump price went up from $1.38 bond to $3.31 bond. The price of public transport shot up from $0.75 to $3.00 per trip in some urban areas.

In response, the largest labour union in Zimbabwe, ZCTU, and other civic organisations called for a three day stay away. This was a trigger for the effective shut down of the Zimbabwean economy at an estimated cost of $100 million per day. Some among the protesters took advantage and escalated the stay away to a violent action that included barricading roads, burning tyres and looting goods from shops. In response to the violence, the government unleashed security forces on protesters and also switched off the internet to discourage spreading messages that would incite more violence.

Among the many implications of the unavailability of the internet, was the restriction on processing of customs declarations at ports of entry to Zimbabwe. Some trucks had to change their routes to avoid Zimbabwe while many spent additional time at border posts waiting for the situation to improve. This increased their border standing time and costs. These may sound like minor headaches in a difficult situation but they can have widespread spillovers given the reliance on imported goods in the Zimbabwean economy.

Despite all the measures taken, money changers have returned to the streets, fuel queues that had disappeared have started resurfacing and price of goods continue to increase. This is a sign that the government has been tinkering with symptoms without addressing the real cause of the problem.

The government needs to address the issue of the bond notes, either they take them away from the market and fully dollarize or allow the exchange rate to float. However, any attempt to introduce a local currency at this juncture will be disastrous as the absence of confidence in the economy and financial system still exists. The factors that led to the loss of value of local currency between 2006 and 2008 still exist as reflected in the loss of value of bond notes between 2016 and 2019.

The government should build confidence in the economy by focusing on creating an environment that enables the business to flourish by allowing market forces to determine the nature of transactions and operations. The government has no role in trying to micromanage firms. No serious investor can invest in a country where there is no guarantee that profits and dividends will be able to be repatriated.

Zimbabwe is strategically positioned geographically in Southern Africa, and any form of instability affects trade in the region. Zimbabwe is a transiting route for goods going or coming from ports such as Durban in South Africa, Beira in Mozambique and Walvis Bay in Namibia. It is at the heart of the North-South Corridor. When there is confusion and uncertainty in Zimbabwe, traders end up opting for longer routes, which in turn increases (the already high) costs of trade. These high costs contribute to the uncompetitiveness of goods manufactured in the region and to the low levels of intraregional trade that persist in SADC.

As for South Africa, instability in Zimbabwe affects South African businesses operating in Zimbabwe. They cannot repatriate their funds as bond notes are not recognised outside Zimbabwe. They will also find it increasingly difficult to export to Zimbabwe as they will not be assured of payment as the liquidity crisis deepens. Zimbabwe is South Africa`s major trading partner in SADC and for this relationship to be sustainable, Zimbabwe`s economy needs to be performing well.

SADC, and South Africa in particular need to help Zimbabwe. SADC can encourage the government to implement the Motlante Commission recommendations with speed. This may assist in resolving some political frictions between the two major political parties and will hopefully avoid more scenes of violent clashes between security forces and citizens. On the economic front, consideration could be given to an extension of a conditional loan that is directed towards production and creation of employment (rather than simply financing public sector consumption). South Africa could also actively seek to import more Zimbabwean products as an incentive to the surviving few firms.

The solution to the political issues in Zimbabwe remains a largely domestic one but the linkages between the economies of the region cannot be denied. It is critical for the neighbours to engage in an informed manner to support the rebuilding of Zimbabwe.